The All-Ireland hurling final was the final match of the 1991 All-Ireland Senior Hurling Championship. The match was contested by Tipperary and Kilkenny on the 1st. of September at Croke Park, and had an attendance of 64,500. It was Tipperary’s third appearance in the championship decider in four years, having lost and won the respective finals of 1988 and 1989. Kilkenny were lining out in their first final since losing the 1987 decider to Galway. Furthermore, it was the first championship meeting of these two great rivals since 1971, when Tipperary were the winners.
Tipperary were red-hot favourites and not just because of their traditional hoodoo over their nearest neighbours. The team’s performances in the provincial championship and their comprehensive defeat of Galway in the All-Ireland semi-final resulted in the premier county being given the bookies nod. Kilkenny had struggles through each of their provincial games and only scraped past Antrim in the All-Ireland semi-final. Back: Colm Bonnar, Cormac Bonnar, Noel Sheehy, Ken Hogan, Declan Ryan, John Leahy, Bobby Ryan.
Front: Nicholas English, Michael Cleary, Michael Ryan, Aidan Ryan, Declan Carr (Captain), Pat Fox, Conal Bonnar, Paul Delaney. 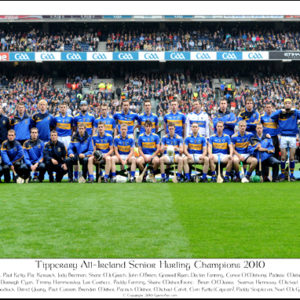 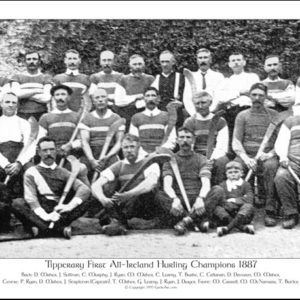